Six strangers, weighed down by individual darkness, come to a coastal land. Seemingly abandoned, there is no one to help but themselves. Stuck between the remains of a broken community and the vast bleakness of the sea, they struggle with isolation, shame and failed support systems.

Gritty dance theatre, with autobiographical testimonials and text, this timely performance gives voice to the vulnerable and unheard. With tenderness and honesty, DROWNTOWN holds up a mirror to a society at tipping point.

Choreographer Rhiannon Faith makes socially conscious work that raises awareness and lobbies for change. She asks here how we can champion authentic belonging for every person and save them from drowning.

ROWNTOWN was named in the Evening Standard’s eight ‘Best dance shows to see in 2020’. 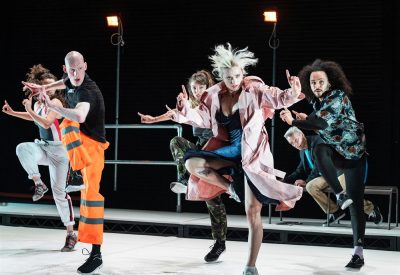 When can I see the only performance of Drowntown?