Since their first get together, to record the eponymous St Agnes Fountain album in 2001, the quartet; David Hughes, Fairport Convention’s Chris Leslie and multi award winning duo Chris While and Julie Matthews, have brought musical invention and laughter to the star-dust atmosphere of the season.

In 2020, David decided to leave the band to concentrate on solo pursuits and whilst his presence will be missed, Chris, Chris and Julie will be keeping the Christmas Aggie spirit alive and touring as a trio celebrating 22 years together with a tour of new material and those old Aggie classics.

‘The Aggie’s’ latest album, Night Of A Million Stars was released in time for the December 2021 tour with 9 brand new songs from the band.

Although the albums accompany the putting up of a thousand Christmas trees throughout Britain and around the globe as their reputation reaches further afield, it is, without question, their magical live performances that have endeared them to an ever-growing audience (tickets were again being sold for this year’s tour as the curtain fell last year). 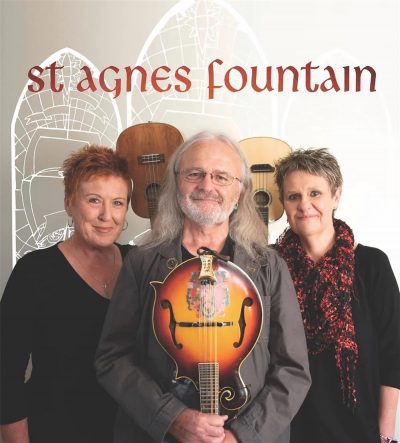 When can I see the only performance of St Agnes Fountain 2022?