Tom Brace cannot predict the winning lottery numbers. He can however see 42 minutes into the future.

Join him for an evening of the impossible as he showcases his unique, incredible and totally pointless abilities in a magic show for all ages!

“Go for the magic, stay for Tom’s charm and comedy.” (Phoenix Remix)

“Hilarious… joyfully daft… if you want to catch a magic show this Fringe, then this
should be it!” (SittingontheFourthWall.com) 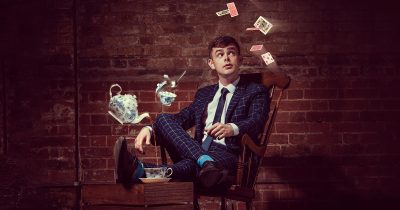 When can I see the only performance of Tom Brace: Embrace the Impossible!?

VIEW ALL
Find out More Book Now
We use cookies to ensure that we give you the best experience on our website. If you continue to use this site we will assume that you are happy with it.OkPrivacy policy