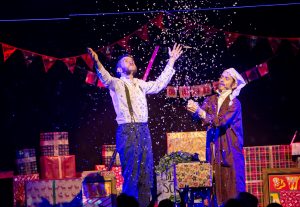 The world’s most distinguished duo of time-travelling magicians Morgan & West present Charles Dickens’ timeless classic: A Christmas Carol. There is only one problem – they haven’t read it. Well, not just one problem – there are also only two of them to play all the parts. Oh, and Mr West is rather insistent on doing a magic show at the same time. How hard can it be?

Morgan & West have appeared on your television screens as part of The Next Great Magician (ITV), Penn & Teller: Fool Us (ITV), and The Slammer (CBBC). Fun for all the family in this utterly splendid (and totally silly) Christmas magic extravaganza!

You have been working together for over a decade. How exactly did you first meet?

We were both studying for science degrees at Oxford University, I for a physics degree and Rob (Mr West) was reading chemistry. I say studying for degrees, what we were actually doing was using our degrees as a rather paper-thin cover story to be involved with as much theatre as we could. We first met in a production of Terry Pratchett’s Wyrd Sisters and bonded over a love of Eddie Izzard and Look Around You – a cult TV show which parodied the old Open University videos we’d all watch in science lessons in school. It wasn’t long before we were writing musicals and other shows together and eventually, we decided to form a double act. We both had a passing interest in magic and so made that our focus. The rest, as they say, is history…

And you were also teachers, at the same school no less?

Indeed, after our degrees we trained as secondary school teachers of science and mathematics and taught side by side (not literally of course, team teaching is brilliant but there’s only so much double act work that you can do in one day…) at King Alfred’s in Wantage.

How scary was it to leave teaching in order to become the duo Morgan & West?

Enormously terrifying. At the time, we had done two runs of magic shows at the Edinburgh Fringe and were also doing small shows in village halls the length and breadth of the UK. We would go into school on a Monday completely exhausted, having been performing in Cumbria the night before. Things took a big leap forward for us in the summer of 2011. We appeared on Penn and Teller: Fool Us (ITV), where we fooled the eponymous Las Vegas magic duo. We took this (and the bags under our eyes) as a sign that we had to make a choice between teaching (which we loved) and performing (which we loved). We chose performing and spent the next eight years touring the country, and indeed the world, with our magic shows.

Morgan & West appear to be Victorian gentlemen. Where did the idea for the characters come from?

We love dressing up, and what better excuse to wear frock coats, double breasted waistcoats, and brightly patterned cravats than Victorian fashion? The facial hair it affords you is pretty fun too. We were also very much influenced at the time by the golden era of magic, when the line between conjuring and reality was blurred – much like the line between mind reading and reality is these days. All in all, it’s excellent fun to play characters on stage who are a little larger than life.

What made you decide to bring your own spin to A Christmas Carol?

Being the 19th Century’s greatest magical duo, it seemed rude not to try to inject some magic into Dickens’ iconic Christmas morality tale. It’s filled with supernatural and ghostly goings on which lend themselves perfectly to magic. What is more, as The Muppets have shown us, it can be enormously fun to mess around with. Put it all together and it was too perfect an opportunity to miss.

This Christmas extravaganza has previously appeared for seasons in Oxford and Edinburgh. What changes year to year as you do this show?

We never stop trying to make things bigger, better, and bolder than before. Our take on A Christmas Carol first appeared on the stages of Edinburgh’s Christmas Festival back in 2016. Since then, it has been tweaked, reshaped, and polished to lead to the stages of The Mill Arts Centre. This year we’re looking forward to revamping the set and style of the show to make it the best version possible of our fun and nonsense.

Is it tricky matching magic to a story?

Enormously so. You can’t just crowbar a magic trick in here or there – you need to make sure that it all makes sense within the story that you’re trying to tell. We spent a long time going over all the versions of Charles Dickens’ classic tale that we could find (of course, cleansing our palette with a re-watch of The Muppets between each successive change in the tale…) to get to the heart of the story and find a way that we could best marry it up to our sense of humour and conjuring expertise. Since this is the third Christmas season that the show will be coming out for, I think it’s safe to say that audiences really get behind what we’ve managed to do.

Mr West plays Scrooge whilst Mr Morgan takes on every other role. Is Mr West a bit of a Scrooge in real life?

Not at all, he’s a delight to work with and has been many years, although I am contractually obliged to say that. And what is more he’s not even that fond of humbugs – much more of a chocolate eclair chap, if I’m honest.

So, has anything ever gone wrong on stage?

Apart from the usual missed lines and theatrical mess-ups, you mean? Actually yes, yes it has. In this show in particular, Mr Morgan has suffered some rather unpleasant burns to his face, beard, and indeed pride after a ball of burning flash paper was propelled towards him by an errant gesture by Mr West, who was brandishing a rose to offer to a member of the audience. Thankfully the injuries sustained were not overly serious and the show was able to continue as planned.

Finally, what’s your favourite part of the show?

Personally, I love a good ‘dad’ joke, the kind of joke where the whole audience groans but still rather enjoys themselves. There’s a particularly good one in this, but I can’t say any more else it’ll spoil the surprise! Magic-wise, the final illusion is really rather fitting to the story and never fails to elicit an enormous gasp of disbelief from the crowd. It is always a real joy to perform but blink and you’ll miss it!