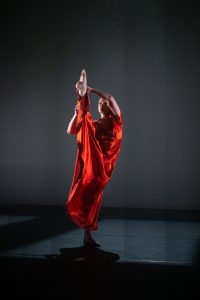 Cohan’s last dances are intensely moving.  He consulted Alston about his recent work shortly before embarking on the project, and Alston responded that the group dances Cohan was creating were similar to his earlier works, but the solos were completely original and new.  Cohan went on to create Afternoon Conversations with Dancers, a collection of eight solos on which he worked collaboratively in dialogue with each dancer, exchanging ideas in words and movement, initially in the studio and then during lockdown over Zoom.

The five dancers performing on stage were Edd Mitton, Freya Jeffs and Laurel Dalley Smith, dancing the solos created for them that we saw them dance afterwards on film, and Ellie Ferguson and Oxana Panchenko dancing solos originally created for Yorke-Edgell and Romany Pajdak.

Alston recommends watching dance works more than once, and this was a chance to see how the spacing, geometry, technique and meticulous attention to detail on stage translated into equally compelling and focussed performances when filmed in huge spaces, such as a beach (Mitton, reaching for the horizon, his feet wet and his suit soaked by seawater), or the Royal Opera House stage (Pajdak, projecting into the cavern of the auditorium).  We saw the open simplicity with which a young dancer (Ferguson) approached a dance created for a mature dancer (Yorke-Edgell), and how Panchenko used the more confined and intimate space at The Mill to add a paradoxical sense of danger to the solo.

The film Lockdown Portraits was a chance to see Jeffs for a second time in her red dress, cart-wheeling through a vast empty foyer in front of windows looking out on desolate office buildings, and Dalley Smith, darting like a dragonfly, transformed through dance into a wild and wary forest creature.  Other dancers on film were Jonathan Goddard, a sculpted figure, revolving on the spot, quivering as if turned to stone and fighting to break free; Dane Hurst, tough but vulnerable holding onto his balance against the graffiti of an underpass, and Yorke-Edgell, dressed in black, seeming to search for an elusive idea against the severe neo-classical marble of the London University Senate House.

The connection between dancers and audience was so close that there was applause after each of the filmed solos.  Alston, Yorke-Edgell and Dalley Smith spoke of Cohan with affection and respect, and their pain in losing him felt raw.  They described Cohan’s ability to see into the soul of his dancers, and create works resonant to choreographer, performer and audience in a time of loss and isolation.  His last dances are conversations in movement that speak to us all.