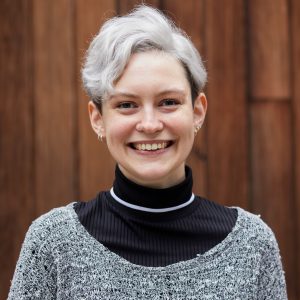 Ahead of Paines Plough’s latest touring show Sessions by Ifeyinwa Frederick coming to The Mill Arts Centre on Wednesday 6th October 2021, we took a few moments to speak with the show’s designer, Anna Reid, to find out about her work, what it takes to create the look of a Paines Plough touring show, how good set and costume design can complement a story and what challenges she faces in creating a set that has to tour all over the UK. Take a read of this fascinating and unique insight into theatre design.

Hello, I’m Anna and I’m the set and costume designer for Sessions. I collaborate with Philip the director and Simi the lighting designer to create the visual and spatial world of the show.

A good script is one you can do in an empty room with a single chair. These are the kind of scripts I like to work with: where the design helps to support a brilliant and engaging story, rather than overwhelming it or drowning it out. But when you’re designing for one-person shows, especially a show which tours to a lot of different spaces many of which are not theatre spaces, you need to support the performer in what they’re doing. You need to help them carry the story from start to finish, as it’s a big task. I can help to visually communicate the emotional story of the show, as well as ground us in a physical space which requires the audience to invest their imagination in helping create it.

Very closely. From the get go Philip and Simi (the lighting designer) and I have been talking to each other, swapping images, talking through the kind of person Tunde is and the kind of space he lives in, how best to communicate the time and place shifts that take place throughout the show, how best to guide the audience through the story. Everything comes from Ifey’s script, but when I’m designing a show it’s my job to bring my own vision into the mix, and that’s what’s so exciting about theatre: the visions of many separate creative people are brought together, rather than the more top-down ‘auteur’-led structure of film for example. So Ifey has provided vital references and details to the visual world she imagined in the writing process, but it’s my job to take what Ifey has created and build on it with Philip and Simi.

Not all design processes start in the same place but when you’re working with a script like Sessions which takes place very clearly in two separate spaces (Tunde’s flat and the therapy room) it’s crucial to have an in-depth understanding of the real spaces you’re trying to communicate, whether or not you end up representing them realistically. So I started with a lot of visual research into the living spaces of young single men living in urban areas (aka: bachelor pads) and therapy rooms. Since we don’t have the time or resources to do a full scene change between each individual scenes (and that’s boring anyway), I was interested to see if there were similarities between the two spaces which could be drawn out to create a single unified environment which we could transform through quick changes in sound and light. Turns out there were many visual tags which were the same: a neutral colour palette, ambient lighting, a feature lamp, matching modular furniture. So I started with the two real spaces and the features and fixtures you’d find there, and then thought about how we could create a sense of confinement and claustrophobia to amplify Tunde’s mental and emotional state through the space, and that’s where the light-up frames came from.

It’s got to fit in the van! So elements have to be robust, and break down into pieces. It also needs to be quick and easy to set up so your stage manager (the majestic Laura Betty Haynes) doesn’t get exhausted doing the get in and get out by themselves, so the frames break down into metal frames and wooden bases to make them easier to manouevre in and out of venues. The set is also designed so the spacing of the frames can expand and contract to fit the different sizes of venues we’re going through, with the rug providing a gravitational centre.

Sessions tours to The Mill on Wednesday 6th October and tickets can be booked here!