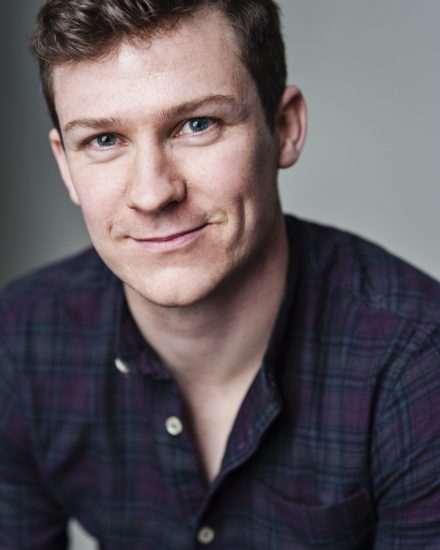 I have done a lot of high-paced, flat out farces but never with a cast of three. I love the energy of slapstick and farce, and the challenge of it from a technical point of view. This is certainly going to be a challenge, but I’m well up for it!

To be totally honest, not a lot! I knew of him as a writer and certainly knew of Jeeves and Wooster but I’d never read or seen any of the adaptations. It’s been a real treat catching up on all that I’ve been missing out on.

This production uses the performers and props to make the sound effects rather than recorded sound. What are some of your favourite effects during the show?

My favourite use of the sound effects in the show is when the character Seppings (another butler in the play) gets carried away with a whole host of ludicrously elaborate sound effects; it becomes a sort of one man show in itself!

I think this play has a really broad appeal. Firstly, it showcases Wodehouse’s amazing use of language and his brilliantly funny and inventive turn of phrase. But the ‘play within a play’ aspect of the script adds a new dimension of farce that will appeal to a family audience as well as to the Wodehouse purists.

This is the question you should never ask an actor… Probably a holiday! Then I’ll go back to working with The Showstoppers and Mischief Theatre, the two theatre companies I’m a member of. I’ll also be keeping my eyes open for other new and exciting opportunities.

Matthew trained at RADA. He is a regular company member of Mischief Theatre and star of The Play That Goes Wrong (Broadway/West End). Other credits include The Midnight Gang (Chichester Festival Theatre) and The Borrowers (Northern Stage).